Get it here NOW! 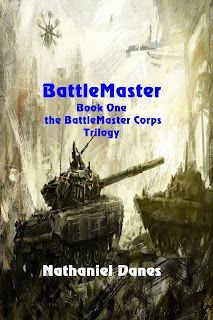 It's a women's army, men are privileged to catch bullets in it.

Private Michael Stanner is continuously reminded of that fact but he refuses to give up. He will fight for victory and the chance to become something more. That is, if he can avoid getting killed on New Calcutta.

Members of the all-female BattleMaster Corps are the elite warriors of the modern battlefield. Their naturally superior multitasking abilities allows them to control teams of drones in combat more effectively than any man through neural links.

The Corps is the cornerstone of the American colonists' decades long struggle for dominance in the Eden System. As three powers fight for control of a terraformed world left vacant by the mysterious disappearance of the Indian colony ship, questions linger about the true motivation for the war.

"The name BattleMaster makes me think of pro wrestling theme songs and 80s action movies, in other words, awesome things.

The book is likewise quite cool, a no-holds-barred military sci-fi action story, with tons of fighting and stuff blowing up.

Here's an example, from the second page of the story. "A fresh surge of adrenaline flooded his arteries. He slapped in a magazine and sprayed and prayed like the rookie he was." That's just the SECOND PAGE.

The book includes women in combat, and no difference is made in the portrayals of the men and the women here. The women are super-tough warriors just like real-life service women (and non-service women.) But more importantly, their portrayal here is a surprising rarity for a genre that usually uses women as kidnap victims.

I'm into my second reading of this book. It's so fun, beyond the awesome portrayals of characters amid the cathartic, literally explosive sci-fi action.

It's a sci-fi action book that's at the same time hopeful and exhilarating. Be sure to crank the 80s movie theme songs while reading."

Posted by Unknown at 6:03 PM No comments: